A Child’s Heart of Love 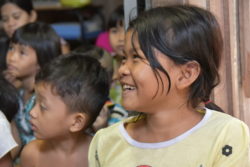 It is beautifully challenging to witness a selfless act of love, especially from a child.

Recently, in the Kids Justice House of Prayer, we’ve been covering the basics and the children have heard the Good News about Jesus, many of them for the first time.

Earlier this week, when my translator and I arrived at the slum community, it was pouring rain. Being new to the house myself, I had not yet encountered arriving in a downpour. There was hardly a soul in sight as we walked the ten minutes or so to get to the house. A bit concerned that the rain would deter them, I reminded myself that it is the Lord who draws their hearts and that I just need to trust Him.

Sure enough, the children came, and they kept filing in… more and more. I was stunned! The rain had not kept them at home after all. In fact, it ended up being our largest group yet. In the midst of the activity and busyness with so many new children, I missed an important detail: a child’s heart of love had made it possible for one of the children to be there.

Moving right through introductions, rules, and an icebreaker, I still was unaware that a very special child was present. However, when the time came for us to get in a circle, hold hands, and give our time to Jesus, one child just continued to sit on the mat across the room despite being called over. I finally realized the issue: she couldn’t walk. I didn’t understand why she couldn’t; she was at least five or six years old. Not wanting her to be left out, I continued to motion to her. She crawled over to the circle and joined hands with the others. It was a beautiful sight: all of the children in the circle, most standing, her sitting, but all in unity in Christ as we prayed and invited Holy Spirit’s presence to come and fill our space.

After our prayer meeting was over, the children started to head home. One of the new girls, who had just received Jesus maybe one or two weeks before, picked her friend up in her arms and headed down the stairs to take her home.

Remembering back to when we arrived, I realized in that moment that she had to of carried her in the pouring rain, down the tracks, across the beam that leads over the raw sewage, and up the stairs to where we meet. Immediately, I was reminded of the paralytic in the Bible whose four friends saw the value in him meeting Jesus, had faith that he would be healed, and brought him to Jesus (see verses below). Right here in the heart of the slums, a child saw the value of bringing her friend to encounter Jesus, and she did something about it.

A child’s heart of love. Beautiful. Let’s join in the love for her friend and pray for a miracle… that the little girl will rise up and walk!

Luke 5:18-19; 24-25 “Some men came carrying a paralyzed man on a mat and tried to take him into the house to lay him before Jesus. When they could not find a way to do this because of the crowd, they went up on the roof and lowered him on his mat through the tiles into the middle of the crowd, right in front of Jesus… So he said to the paralyzed man, ‘I tell you, get up, take your mat and go home.’ Immediately he stood up in front of them, took what he had been lying on and went home praising God.”